Into the zto express

Bringing Happiness to More People through Our Services

"I am pleased to report strong operational and financial results for the first time as a public company," commented Mr. Meisong Lai, Founder and Chief Executive Officer of ZTO. "Our parcel volume in the past quarter surged to 1,102 million, generating RMB2,353.1 million in revenues and RMB547.2 million in net income, an increase of 66.6% and 156.8% respectively over the same period last year. We are strengthening our industry leading position with parcel volume continuing to gain growth momentum during China's peak e-commerce shopping season. Our network partners collected approximately 184.6 million parcels during the Singles' Day period this year, which spanned from November 11, 2016 to November 16, 2016. Our successful IPO last month has strengthened our brand image and better positions us to capture the enormous opportunities in China's rapidly growing express delivery industry. We continue to benefit from our distinctive "shared success" system, which aligns the interest of our network partners with ours, maximizes their growth and profitability, and strengthens their loyalty to the ZTO brand. Our network partner model allows us to rapidly build scale across China's highly fragmented and geographically dispersed merchants and consumers. We will continue to invest in infrastructure, equipment and technology to enhance our scale, operational efficiency, improve service quality and reduce costs. We are leveraging the vast amount of resources our network provides to expand our ecosystem and explore new opportunities in adjacent markets such as less-than-truckload and cross-border logistics. We are also working to grow our customer base across different industries such as manufacturing and agriculture."

"We continue to benefit from the economies of scale created by the rapid growth of our business and enhancement of our operational efficiency," commented Mr. James Guo, Chief Financial Officer. "As a result, our adjusted EBITDA margin grew significantly in the past quarter to 35.4% from 28.3% in the same period last year. Most importantly, our adjusted net income surged to RMB547.4 million from RMB263.3 million in the same period last year reflecting the increasing level of efficiency and the operating leverage we are creating. As of the end of September, we have installed our automated sorting system in five sorting hubs across China to increase operational efficiency. We also expanded the size of our self-owned fleet of trucks and increased the proportion of parcels shipped using our higher capacity and more cost-efficient trucks. These initiatives have effectively reduced our unit sorting and line-haul transportation costs and enabled us to sustain our leading cost advantage in the industry."

Revenues were RMB2,353.1 million (US$352.9 million), an increase of 66.6% from RMB1,412.4 million in the same period last year. The increase was mainly driven by an increase parcel volume as a result of overall market growth, which increased to 1,102 million during the third quarter of 2016 from 729 million in the same period last year. The Company completed the acquisition of the express delivery businesses from 16 network partners on October 31, 2015 and from another network partner on January 1, 2016. Those acquired businesses in the aggregate contributed RMB418.9 million (US$62.8 million), or 17.8%, of revenues in the three months ended September 30, 2016.

Total cost of revenues were RMB1,500.6 million (US$225.0 million), an increase of 54.3% from RMB972.7 million in the same period last year. The increase primarily resulted from increases in line-haul transportation costs, sorting hub operating costs, and cost of accessories which were partially offset by a decrease in waybill material cost as Company's customers used more digital waybills, which have lower costs than paper ones. An aggregate of RMB325.6 million (US$48.8 million) of the Company's cost of revenues in the third quarter of 2016 was attributable to the express delivery businesses acquired on October 31, 2015 and January 1, 2016.

Sorting hub operating cost was RMB473.1 million (US$70.9 million), an increase of 56.4% from RMB302.6 million in the same period last year. The increase was mainly due to increased labor costs of RMB157.7 million (US$23.6 million) as a result of business acquisitions and wage increases, sorting hub rental expenses and depreciation of property, plant and equipment. As a percentage of revenues, sorting hub operating cost accounted for 20.1%, a decrease from 21.4% in the same period last year, mainly due to economies of scale and improved sorting efficiency from the increasing use of automation in the Company's sorting facilities.

Cost of accessories was RMB67.8 million (US$10.2 million), a significant increase from RMB28.0 million in the same period last year. The increase was in line with growth in the Company's revenue from the sale of accessories to its network partners which includes thermal paper for digital waybill printing, portable bar code readers, ZTO-branded packaging materials and uniforms. As a percentage of revenues, cost of accessories accounted for 2.9%, an increase from 2.0% in the same period last year mainly due to the increased sale of thermal paper for digital waybill printing.

Selling, general and administrative expenses were RMB128.4 million (US$19.3 million), a decrease of 17.8% from RMB156.2 million in the same period last year. The decrease was primarily due to a decrease in share-based compensation expenses, which were partially offset by an increase in rental expenses, depreciation and amortization and sundry office overhead. As a percentage of revenues, selling, general and administrative expenses decreased from the same period in 2016 primarily due to reduced share-based compensation expenses and better operating leverage.

Other operating income, net was RMB17.4 million (US$2.6 million), compared with RMB20.2 million in the same period last year. The decrease was mainly due to a decrease in government subsidies.

Interest income was RMB9.7 million (US$1.5 million), compared with RMB2.3 million in the same period in 2016, primarily due to increased interest income from bank deposits.

Interest expense was RMB3.8 million (US$0.6 million), compared with RMB4.3 million in the same period in 2016, primarily due to the reduced averaged interest rate on bank loans.

Net cash provided by operating activities was RMB831.7 million (US$124.7 million), compared with 391.2 million in the same period last year.

As of September 30, 2016, the Company had cash and cash equivalents and restricted cash of RMB2,204.5 million (US$330.6 million), compared with RMB2,718.8 million as of December 31, 2015. The decrease was primarily due to the purchase of land use rights, construction of self-owned automated sorting hubs and expansion of the Company's self-owned fleet of trucks, sorting hub facilities, and office space.

Based on current market conditions and current operations, adjusted net income[5] for the fourth quarter of 2016 is expected to be in the range of RMB720 million (US$108.0 million) to RMB750 million (US$112.5 million), representing a 48.6% to 54.8% increase from the same period last year. This represents management's current and preliminary view, which is subject to change.

The Company announced that its founder, chairman and CEO, Mr. Meisong Lai, and certain other directors of the Company have informed the Company of their intention to purchase up to US$20 million of ADSs from the open market, as a testament to their confidence in the Company's business and prospect. Any such purchase will be conducted in compliance with applicable law.

This announcement contains translation of certain Renminbi amounts into U.S. dollars at specified rates solely for the convenience of readers. Unless otherwise noted, all translations from Renminbi to U.S. dollars were made at the exchange rate of RMB6.6685 to US$1.0, the noon buying rate on September 30, 2016 as set forth in the H.10 statistical release of the Federal Reserve Board.

Use of Non-GAAP Financial Measures

The Company uses adjusted EBITDA and adjusted net income, each a non-GAAP financial measure, in evaluating ZTO's operating results and for financial and operational decision-making purposes.

Adjusted EBITDA and adjusted net income should not be considered in isolation or construed as an alternative to net income or any other measure of performance or as an indicator of the Company's operating performance. Investors are encouraged to review the historical non-GAAP financial measures to the most directly comparable GAAP measures. Adjusted EBITDA and adjusted net income presented here may not be comparable to similarly titled measures presented by other companies. Other companies may calculate similarly titled measures differently, limiting their usefulness as comparative measures to ZTO's data. ZTO encourages investors and others to review the Company's financial information in its entirety and not rely on a single financial measure.

Dial-in details for the earnings conference call are as follows: Additionally, a live and archived webcast of the conference call will be available at http://ir.zto.com/.

ZTO operates a highly scalable network partner model, which the Company believes is best suited to support the significant growth of e-commerce in China. The Company leverages its network partners to provide pickup and last-mile delivery services, while controlling the mission-critical line-haul transportation and sorting network within the express delivery service value chain.

This news release contains "forward-looking" statements within the meaning of Section 27A of the Securities Act of 1933, as amended, and Section 21E of the Securities Exchange Act of 1934, as amended, and as defined in the Private Securities Litigation Reform Act of 1995. These forward-looking statements include but are not limited to the Company's unaudited results for the third quarter of 2016, ZTO management quotes and the Company's financial outlook for the fourth quarter of 2016.

These forward-looking statements are not historical facts but instead represent only the Company's belief regarding expected results and events, many of which, by their nature, are inherently uncertain and outside of its control. The Company's actual results and other circumstances may differ, possibly materially, from the anticipated results and events indicated in these forward-looking statements. Announced results for the third quarter of 2016 are preliminary, unaudited and subject to audit adjustment. In addition, the Company may not meet its financial outlook for the fourth quarter of 2016 and may be unable to grow its business in the manner planned. We may also modify our strategy for growth. In addition, there are other risks and uncertainties that could cause the Company's actual results to differ from what it currently anticipates, including those relating to the development of the e-commerce industry in China, its significant reliance on the Alibaba ecosystem, risks associated with its network partners and their employees and personnel, intense competition which could adversely affect the Company's results of operations and market share, any service disruption of the Company's sorting hubs or the outlets operated by its network partners or its technology system. For additional information on these and other important factors that could adversely affect the Company's business, financial condition, results of operations, and prospects, please see its filings with the U.S. Securities and Exchange Commission.

[1]An investor relations presentation accompanies this earnings release and can be found at ir.zto.com.

[2]Adjusted EBITDA is a non-GAAP financial measure, which is defined as net income before depreciation, amortization, interest expenses and income tax expenses, adjusted to exclude (i) shared-based compensation expense; and (ii) gain on deemed disposal of equity method investments.

Adjusted net income is a non-GAAP financial measure, which is defined as net income before (i) share-based compensation expense and (ii) gain on deemed disposal of equity method investments.

[3]Adjusted net income is a non-GAAP financial measure, which is defined as net income before (i) share-based compensation expense and (ii) gain on deemed disposal of equity method investments.

[5]Adjusted net income is a non-GAAP financial measure, which is defined as net income before (i) share-based compensation expense and (ii) gain on deemed disposal of equity method investments. 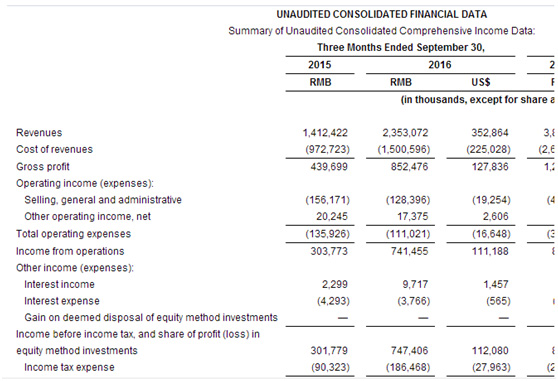 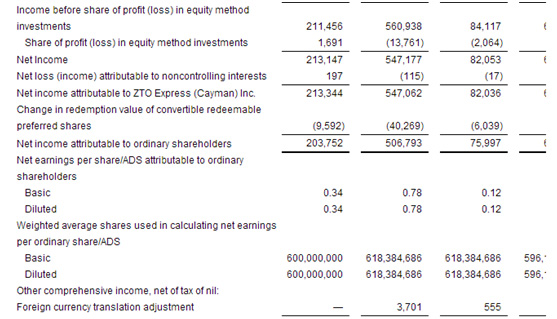 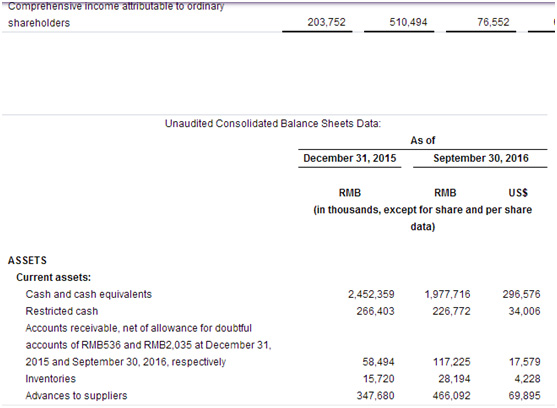 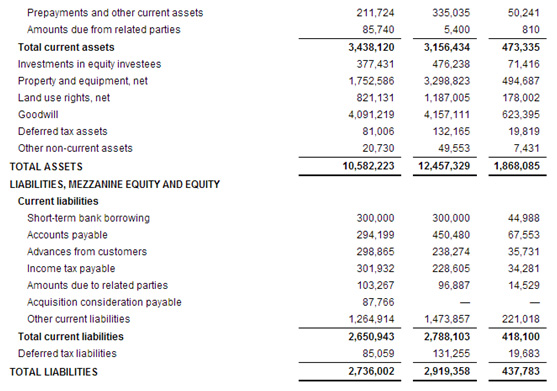 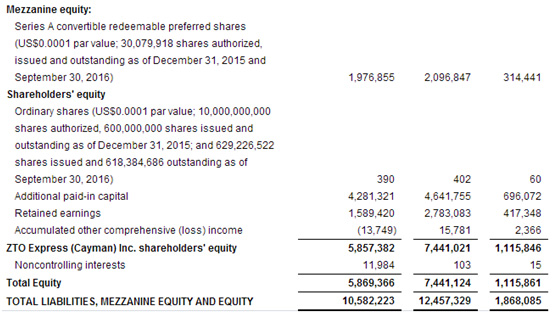 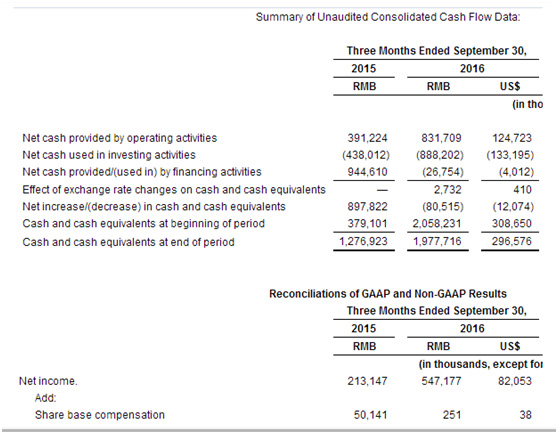